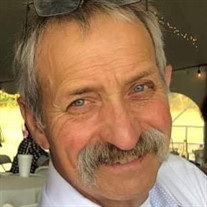 TEMPLETON- Michael L. Matuszewski, 62, passed away on Wednesday, January 19, 2022 surrounded by his family. He was born on January 27, 1959, son of Leonard and Laura (Hetnik) Matuszewski. Mike was known to many as “Mike the Polack”. He attended Gardner Public Schools and Wentworth College in Boston. Mike became a Master Carpenter learning from many of the elder craftsmen in and around surrounding towns. The owner of Premier Carpentry and Woodworking, much of his work was in and around the Boston area restoring historical sites. Mike’s greatest loves was “The Team”; his wife Susan whom he married 38 years ago; his two sons and two daughters (in law), George and Tammy Matuszewski, Alex and Kristine Matuszewski; “Jaju” to five grandchildren, Bryce, Bradyn, Brecken, Alana, and Ella Matuszewski; and his faithful german shepherd dog, Sophie. Mike enjoyed family, ski and snowmobiling trips, family camping to Lake George, motorsports, traveling to many nascar venues. He was an avid sport shooter and one of the founding members of Northeast Steel Plate Shooters, where he was known as “Magnum Mike”. Past member of Otter River Sportsman Club and Templeton Fish and Game. Mike loved fly fishing and was treasurer of the region's Trout Unlimited. He enjoyed teaching fly fishing and tying flies. His knowledge , kindness and sense of humor will be missed by many. In lieu of flowers donations can be made to Project Healing Waters, P.O. Box 695, Lapata, MD 20646. A celebration of life will be held at a later date. To leave an online condolence please visit www.mackfamilyfh.com Mack Family Funeral Homes, 105 Central Street, Gardner, MA, is assisting with arrangements. Kevin J. Mack and Walter C. Taylor, funeral directors.

The family of Michael L Matuszewski created this Life Tributes page to make it easy to share your memories.