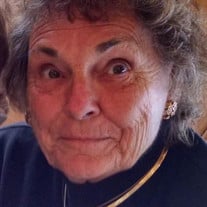 GARDNER - Marjorie (Marge) Ann (Jandris) Kraskouskas embraced and enjoyed life for 77 years, before letting go on December 23, 2019.  She was the wife of John C. Kraskouskas of Gardner and North Attleboro, Massachusetts, whom she married in 1960.  Marge noted that John was a person who had moral values, was well read and a good conversationalist – all traits she admired and loved in the man whom she spent 59 years with raising a family, traveling together and having conversations Marjorie, as her parents called her all the time, was the first born child of Joseph and Evelyn (Pratt) Jandris on April 30, 1942.  Siblings following were brothers; Joseph, Edward and Robert.   Marjorie collected elephants and giraffes.  Her first elephant was a gift from her father when he returned from serving in World War II.  She loved to read and kept a journal.  Her love of reading resulted in the family, including children, grandchildren, great grandchildren and her older brother reading and discussing books.  Yearly she would hold events such as ‘Dog Day’ where there was dog trivia, dog races, and the building of dog houses out of dog bones and various items.   Original poetry was written yearly by many family members to celebrate the birthday of her husband, John.  Christmas stockings where hung each and every year for all family members and there were the same number of snowmen, Santa Clauses and bunnies on the shelves as there were family members.  The Easter Bunny arrived ‘unseen’ yearly at each and every house with gifts hidden outside for all family members.  Marge was pleased when the grandchildren and great grandchildren visited and relished when Grandaughter Kingsley informed her she liked her ‘yard art’.  Marge was an active member of the League of Women Voters of the Attleboro’s and served as President.  She was most proud of the accomplishments of the League members in North Attleboro where they championed the building of a new town hall, supported the expansion of recreational facilities, and a children’s librarian.  Her work in the League lead to her involvement in town politics in North Attleboro where she served on the Zoning Board and Solid Waste Committee before running for the office of Board of Selectmen where she served for 18 years.  When asked at one point what her proudest accomplishments were, she stated: ‘outside of family, the fact that anyone can address the board of selectmen at their meetings, the closing of the landfill, the establishment of a human resource department for the Town and the formation of the local cable company, North TV. Marge noted that her first job was picking blueberries, a job that everyone should do at some point to appreciate what it takes to bring food to the table.  She loved working at Priscilla Candy Shop in Gardner, MA during high school.  Marge worked for 28 years at the Hockomock Area YMCA in North Attleboro, MA, an organization that grew during her time from one to four branches.  She loved the Y, what is stood for and was honored to be its VP of Human Resources.  When she retired, the Marge Kraskouskas ‘Caring Award’ was put in place and is given to an employee yearly who exemplifies caring about others.  Marge/Mom/Grams/Great Grams will be missed by her family: 10 children, 17 grandchildren, 10 great grandchildren and many others. Son Michael and his wife Mary of Rehoboth, Massachusetts, Daughter Cheryl Lewis and her husband Jeff, of Barrington, Rhode Island; grandchildren: Jaclyn Santerre and her husband Brian, Jillian Lewis and her spouse Melissa Farrish, and Brandon Lewis; Great Grandchildren, Ethan, Emily, Evelyn, Elton, Etticus (children of Jaclyn) and Kathryn, daughter of Jillian; Daughters Kathleen Kraskouskas of San Jose, California and Jennifer Kraskouskas of Sonora, California; Daughter Karen Mobriant of Decatur, Tennessee; grandchildren; Adam Kraskouskas and his wife Erin Nelson, along with Charles Mobriant and Tyler Mobriant; great grandchildren: Tylon and Bailey (children of Adam) along with Miles Mobriant, son of Tyler and Waylon, son of Charles Mobriant; Daughter Mindy Holt and her husband Wayne of Derry, New Hampshire; grandchildren:  Erin and Elissa; Son John Edward and his wife Kristen of North Attleboro, MA, grandchildren: Shannon, Maia, John, Ava; Son Jeffrey and his significant other, Agnes Tsui of Mountain View, California:  grandson:  Jefffrey; Son Matthew of Hermosa Beach, California:  grandchildren:  Matthew and Michael; Daughter Carolynn Thompson and her husband Keith of Sonora, California;  grandchildren:  Collins and Kingsley. A Mass of Christian Burial will be held Saturday, December 28, 2019 at 11 am in Holy Rosary Church 135 Nichols St., Gardner.  Burial will follow in St. John's Cemetery, Gardner. Calling hours will be held Friday, December 27, 2019 from 5 to 7 pm at the Mack Family Funeral Home 105 Central St., Gardner. In lieu of flowers, the family suggests that memorial donations be made in her memory to the Hockomock YMCA, 300 Elmwood St., N. Attleboro, MA 02760. To send an online condolence please visit www.mackfamilyfh.com. Mack Family Funeral Home 105 Central St., Gardner is directing arrangements.

GARDNER - Marjorie (Marge) Ann (Jandris) Kraskouskas embraced and enjoyed life for 77 years, before letting go on December 23, 2019.  She was the wife of John C. Kraskouskas of Gardner and North Attleboro, Massachusetts, whom she married in... View Obituary & Service Information

The family of Marjorie Ann Kraskouskas created this Life Tributes page to make it easy to share your memories.