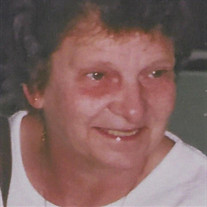 STERLING- Lucille P. (Sicard) Goguen, formerly of Leominster, died peacefully Sunday, November 15 in Sterling Village, after a brief illness. She was born December 21, 1936 on “French Hill“ in Leominster, the daughter of Aurele and Beatrice (Joyal) Sicard. She attended elementary school at St. Cecilia’s and later at Leominster High School. She was a lover of cats, enjoyed good food, crochet and liked to walk in her spare time. She worked at the former Dupont and Pferd companies, both in Leominster. She was also employed at the former Asher Pant Company of Fitchburg and worked for many years at the Sterling Cider Mill. In 1957, she married Clarence J. Goguen and shortly after, moved to Redstone Hill Road in Sterling, where she was a long time resident. She is survived by two sons, Michael J. Goguen and his wife, Diane (Follansbee) of Hubbardston and David P. Goguen of Columbia, KY; two grandchildren, Nicole (Goguen) Noel and husband, Kyle of Barre and Jennifer Goguen of Hamilton, NY; two great grandchildren, Cole and Weston Borst; a brother, Charles Sicard and his wife, Adel of Lancaster; and her beloved cat and companion, Cheddar. She was preceded in death by her parents; a brother, Robert Sicard; and three sisters, Sr. Theresa Sicard, R.C.E., Lorraine McDermott and Rita Sicard. The funeral Mass will be held Tuesday, November 24, at 11:00 AM at St. Cecilia’s Church. Burial will be private at Hillside Cemetery in Sterling. In lieu of flowers, the family requests memorial contributions directed to the care of cats be made to Sterling Animal Shelter, 17 Laurelwood Road, Sterling, MA 01564 or to the Alzheimer’s Foundation of America, 322 Eight Ave. 16th Floor, NY, NY 10001.

The family of Lucille (Sicard) Goguen created this Life Tributes page to make it easy to share your memories.