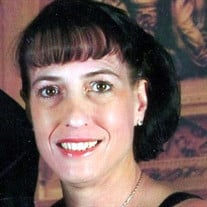 ASHBURNHAM- Laura-Lee (Hamel) Michel, 50, of Ashburnham, died Thursday, June 13, at Heywood Hospital. Laura was born March 26, 1969, in Gardner, daughter of Holly (Fagan) and the late Paul Hamel. She was a graduate of Mount Wachusett Community College. Laura managed Regional Inventory Control for Lowe’s Home Improvement. She had previously been a substitute teacher for the Ashburnham/Westminster School District, and in HR for Shaws Supermarkets. She was a loving and caring wife, mother, daughter, and friend. She was also clever and devoted. Above all, though, she will be remembered as being selfless even during her own struggles. Laura was a member of St. Denis Church and the Ashburnham Auxiliary American Legion. She enjoyed fishing, crabbing, and the Red Sox. She leaves her husband of 30 years, Mark Michel; her mother and step father, Holly and Augie Bates of Northport, FL; one son, Stephen Michel of Portland, OR; one daughter, Ashley Michel of Framingham; two brothers, Michael Ellison of Austin, TX and Paul Hamel of Ashburnham; her mother in law, Pat Michel of Fork, MD; many aunts, uncles, cousins, and friends. Calling hours are Tuesday, June 18, from 4:00 to 7:00 P.M. at Mack Family Funeral Homes, Lamoureux-Smith & Poliks Chapel, 105 Central St., Gardner. The funeral will be held Wednesday, June 19, at 10:00 A.M. at the funeral home. Burial will follow in New Cemetery in Ashburnham. In lieu of flowers, memorial contributions may be made in Laura-Lee's name to Dana Farber Cancer Institute, P. O. Box 849168, Boston, MA 02284 or by visiting www.dana-farber.org.

The family of Laura-Lee (Hamel) Michel created this Life Tributes page to make it easy to share your memories.