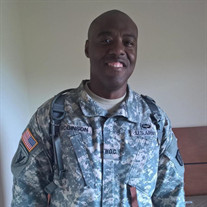 Kendall D. Robinson Sunrise July 28, 1972 - Sunset August 5, 2020 Kendall D. Robinson, 48, of Colorado, formerly of Leominster, son of Sharon E. (Bowie) and the late David E. Robinson. Kendall was born on July 28, 1972 in New York City. He attended SouthEast Elementary School and graduated from Leominster High School in 1991 where he was active in sports and drama which carried over into his adult life. Kendall served in the US Army from 1998 until his honorable discharge in 2008. He continued his service in the National Guard until his passing. During his military service, Kendall was stationed in Ft Bliss, TX, Ft Carson, CO, Germany, and Korea. He deployed to Israel and Saudi Arabia. He was awarded multiple Army Commendation Medals, Army Achievement Medals, and Good Conduct Medals for his service. Kendall attended Boston University and received his undergraduate degree in business from Regis University in 2016. He continued his education at Regis University earning his masters degree in Information Technology in 2018. Kendall was a very loving son who always did the best he could to make his parents proud. He was an avid runner and bicycle enthusiast. He ran the Boston Marathon twice completing it in under five hours which was a huge accomplishment for him. He enjoyed participating in local and regional bicycle races in Germany, to include an off-road race through the Dolomite Mountains of Italy. Kendall was a world traveler with exotic destinations one could only imagine. His favorite country was Germany, as he loved their outdoor spirit and friendly demeanor. He was always a giver and a jokester. If you needed something and he had it, it was yours. Kendall was forever changed with the passing of his son, Kendall W. Robinson, who was 18 years old when he passed in January of 2019. Besides his mother, Sharon of Leominster, he leaves his wife, Helen Robinson; his children, Kevin of Columbia, and Emmett of Colorado Springs; his step-children, Adelaide and Reed Evans, both of Colorado Springs; his siblings David Bryce and Patricia Robinson, both of New Jersey, Davina Robinson of Worcester and Denise Robinson of Leominster; his nieces and nephews, Elizabeth Robinson of Worcester, Monica Cayenne Robinson, Latrell Cayenne, Lorenzo Cayenne and Tru Taylor all of Leominster; his great aunt, Edna M. Johnson of Brooklyn; his aunt, Kathleen Alford of NY; favorite cousins, Lisa Boyd of NY and Krissy Johnson-Ashby of Brooklyn. He also leaves behind his beloved cats and a multitude of friends from around the world. Kendall will be deeply missed by family, friends, and all who loved him. We will cherish his memories and continue to live with a positive attitude, as he would have wanted. May heaven smile on him and may he dwell in the house of the Lord forever. A funeral Mass will be held Friday, August 21, at 10:00 AM at St. Cecilia’s Church, 180 Mechanic St., Leominster. Due to COVID concerns, there will be a temperature and smell check conducted for all individuals prior to entering, and social distancing will be practiced throughout the event. To send an online condolence, please visit www.mackfamilyfh.com. In lieu of flowers, we ask that you consider a donation to National Veterans Foundation | The Lifeline for Vets or Active Heroes.

The family of Kendall D. Robinson created this Life Tributes page to make it easy to share your memories.