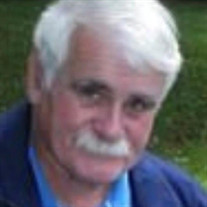 ORANGE- Jack D. Gandee, 81, of Orange, died Wednesday, May 27, in his home surrounded by his loving family. Jack was born May 22, 1939 in Philadelphia, son of the late Jack M. and the late Katherine (Moran) Gandee. He graduated from Princess Ann High School in Virginia Beach. Being a part of a military family, Jack lived in 48 of the United States. He proudly served in the U.S. Marine Corps and wore his Marine Corps hats and shirts with pride. He worked as a test man for General Electric in Fitchburg, Ma., before his retirement. Jack was a former Boy Scout Master for Troop 27 in East Templeton. He was a past member of the Gardner Municipal Golf Course, the Napoleon Club, the Gardner American Legion, bowled in many leagues at the Gardner Ten Pins and the G.E. Union IUE-CWA. Jack enjoyed golfing, reading, working on cars, walks on the beach in Maine, talking and telling stories. He adored and loved all of his grandchildren and anytime that he got to spend time with them and his dogs, Kelsi and Kadi. He leaves behind his loving wife of 30 years, Karen (Sears) Gandee; one daughter, Michelle Gandee and husband, David Chaple of Townsend; two sons, Jason Patch and fiancé, Haley Reddick of Hudson, NH and Bryan Patch and girlfriend, Jillian Connor of New Braintree; seven grandchildren, Katherine, Samuel and Julia Chaple, and Brayden, Devyn, Mackenzie and Kayleigh Patch; several nieces, nephews and cousins. Jack’s family would like to sincerely thank the staff at Beacon Hospice especially his nurses, Deborah, Jenn M., Marion, Shana, Jenny A., Gloria and Aggie. The funeral with Military Honors will be held at a future date to be announced. Fiske-Murphy & Mack Funeral Home, 110 New Athol Rd., Orange is assisting the family with arrangements.

ORANGE- Jack D. Gandee, 81, of Orange, died Wednesday, May 27, in his home surrounded by his loving family. Jack was born May 22, 1939 in Philadelphia, son of the late Jack M. and the late Katherine (Moran) Gandee. He graduated from Princess... View Obituary & Service Information

The family of Jack D. Gandee created this Life Tributes page to make it easy to share your memories.