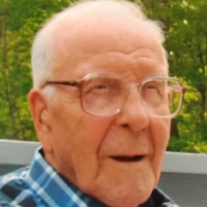 Westminster-J. Felix Pitre, 96, of Westminster, died Saturday, December 8, in his home with his family by his side. Felix was born February 24, 1922, in Rogersville, New Brunswick, son of the late Joseph and Priscilla Pitre. Felix worked as a truck driver, was a lumberjack, and an extruder operator. He was a foreman at the former Kell Plastics in Leominster. Felix enjoyed playing cards, and was an avid outdoorsman. He leaves two son's, Edgar Pitre and his wife, Susan with whom he lived, and Armand Pitre and his wife, Soila of Ashby; . He leaves seven grandchildren, eight great grandchildren, and many nieces and nephews. Felix was predeceased by his wife of seventy six years, Alma M. (Doucette) on July 11, 2018. He was also predeceased by two brother's, Edgar and Edward Pitre, and one sister, Beatrice Gallant. Felix's family would like to thank the Beacon Hospice staff, especially Joanne Fitch, for all the care they provided. Calling hours will be held Thursday, December 13, from 9:00 to 11:00 A.M. with the funeral beginning at 11:00 at Simard Funeral Home, 14 Walker St., Leominster. Burial will follow at St. Cecilia's Cemetery. In lieu of flowers, donations may be made in Felix's name to Beacon Hospice, 36 Williams St., Leominster, Ma. 01453.
To order memorial trees or send flowers to the family in memory of J. Felix Pitre, please visit our flower store.