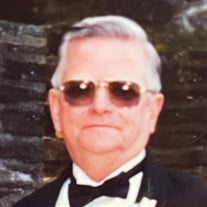 Leominster-Henry E. Lapierre, 91, died Monday, November 1, 2021 at Sterling Village after an illness. He was the husband of the late Dorothy M. (Tourigny) Lapierre who died in 2014.He leaves his daughter, Kathleen Hughes and her husband MG(Ret) Daniel Hughes of Potomac Falls, VA; two grandchildren, Daniel Hughes and his wife Daisy of Leesburg, VA and Kimberly Hughes and her husband, Lucas Carver of Charlotte, NC; three sisters, Vivian Beauvias, Rita Melanson and Yvette Comeau, and several nieces and nephews. Henry is predeceased by his son, Anthony Lapierre who died in 2017; a brother Albert Lapierre and a sister, Yvonne Adams. Henry was born in Rumford, ME on April 27, 1930 a son of the late Antoine and Albertine (Blais) Lapierre. He attended St. Cecilia's School. He moved to Leominster as a young child and grew up here. He served in the Navy Reserves for several years. Henry worked for the former Fryes Dairy as a milk man in Leominster, he worked in boiler maintenance for Gary Chemical, K-T Plastic and retired from Burbank Hospital. He was a member of St. Cecilia's Church and a Franco American Veteran. He was well known for being a handyman which is something he truly enjoyed. Henry's family would like to thank the staff at Sterling Village for the care given to him during the years he spent with them. Henry's funeral will be held on Monday, November 8, 2021 from the Simard Funeral Home, 14 Walker Street, Leominster, MA 01453 with a mass of christian burial at. 10:00 a.m. in St. Cecilia's Church, 168 Mechanic Street, Leominster, MA . Burial will follow in St. Cecilia's Cemetery, Mechanic Street, Leomisnter. MACalling hours will be in the funeral home on Sunday, November 7, 2021 from 2:00 - 4:00 p.m. In lieu of flowers, memorial contributions can be made in his name to the St. Cecilia's Church Renovation Fund, 168 Mechanic Street, Leominster, MA 01453. To leave an online condolence please visit www.mackfamilyfh.com Kevin J. Mack and Walter C. Taylor funeral directors.

Leominster-Henry E. Lapierre, 91, died Monday, November 1, 2021 at Sterling Village after an illness. He was the husband of the late Dorothy M. (Tourigny) Lapierre who died in 2014.He leaves his daughter, Kathleen Hughes and her husband MG(Ret)... View Obituary & Service Information

The family of Henry E Lapierre created this Life Tributes page to make it easy to share your memories.