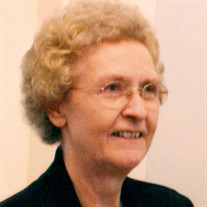 BALDWINVILLE- Helen Rochon of Baldwinville, died Monday, December 16, at Alliance Health of Baldwinville. During all her years, Helen’s prime motivation was to be the best mother and homemaker that she could be; and she was just that. She was always a supporter of every activity that her children were involved in and that was true even into old age. Her children and later her church were her clear objectives for living and yet she made room for her dear friends. She will be missed by all of her family and friends as she moves into a better place. Married on November 22, 1958, to Rolland Rochon, they raised four children: Deborah, Paul, Glenn and Daniel. They are now Debby Knott and husband Bill of Laurel, MD. ; Their sons, Evan Knott and wife, Lauren, Brady Knott and wife, Meagan and great grandson, Henry. Paul and his wife, Barbara of Wrentham, MA and their daughters, Kori Bucci and husband Jeremy, and Jill Deveu and her husband, Frank. Sons Glenn and Daniel live in Worcester, MA. She also leaves her beloved sister, Pauline and husband, Dick. They have two sons, Gregory and partner, Lisa, and Erik and wife, Heather and 2 nephews, Tyler and Gavin and niece, Alisa. A sole surviving aunt, Elma Pont, thirteen years her senior of Miami was one of her favorites. Her stepmother, Betty Davidson of Phillipston also survives her. Helen graduated from Fitchburg State Teachers College in 1958. She taught grade 2 at Ellen Bigelow School in Athol for one year until her family came along. For a couple of years afterward she tutored privately. She was a devoted member of the Gardner Seventh Day Adventist Church since 1978 and held varied jobs within the church system. Dementia crippled her starting in 2014, which severely limited her, until she had to enter the nursing home at the Alliance Health system of Baldwinville MA in November of 2018. She will be sorely missed by all. The funeral will be held Friday, December 20, at 11:00 A.M. at the Gardner Seventh Day Adventist Church, 100 Colony Road, Westminster. Burial will be private. Mack Family Funeral Homes, Lamoureux-Smith & Poliks Chapel, 105 Central St., Gardner, is assisting the family with arrangements.

BALDWINVILLE- Helen Rochon of Baldwinville, died Monday, December 16, at Alliance Health of Baldwinville. During all her years, Helen&#8217;s prime motivation was to be the best mother and homemaker that she could be; and she was just that.... View Obituary & Service Information

The family of Helen Rochon created this Life Tributes page to make it easy to share your memories.