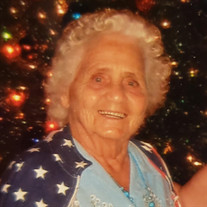 ATHOL- Helen Marie Chiasson, 96, passed away peacefully on January 30, 2019 at her daughter's home in Ballston Spa, NY, with her family at her side. She is the widow of retired Police Chief Ernest Chiasson of Athol. She was born in Philadelphia, where she met and married her husband who preceded her in death. They spent their time between Athol and Lakeland, FL. She was an avid golfer and was a long time member of both Ellinwood Country Club in Athol and Cleveland Heights Country Club, Lakeland. Helen was also a member of the Petersham Curling Club. She served her country proudly during World War II and was very proud of the fact she was an Automotive Equipment Operator during her service. She always told people that she "drove a deuce and a half!". During that time, she was awarded the Good Conduct Medal, World War II Victory Medal, and the American Campaign Medal. She was a member of the Catholic War Veterans, the Women's Army Corps Veterans, and the American Legions in Lakeland, FL, Athol, MA, and Saratoga, NY. She also marched in all the Veteran's parades until the age of 93. She truly was a little warrior. She was a member of Our Lady Immaculate Catholic Church in Athol and St. Joseph Catholic Church in Lakeland. She volunteered for many years at the St. Joseph Thrift Store. Helen retired from L.S. Starrett and from the Polk County Sheriffs Department as a school crossing guard. She worked as a crossing guard until she was 93. She was predeceased by one sister, two brothers, and many in laws. She is survived by her daughters, Penney Dascoli of Gaffney, SC, Linda (Cookie) Gibeault (Bill) of Ballston Spa, NY; granddaughter, Lesley Micale (Dan Russomano) of Burnt Hills, NY; grandsons, Adam Gibeault (Magaly Acevedo) of Brooklyn, NY, and Joshua Gibeault (Noel) of Stillwater, NY; great grandchildren, Malia and Vero Russomano and Mayzie and Harper Gibeault; close family friend, Jim Micale. She is also survived by her sister in law, Betty Pappas of AZ; many nieces and nephews. She leaves behind family and many many friends to mourn her passing. Sincere thanks to Community Hospice in Saratoga Springs, NY and to her nursing team for their kind and caring attention in her final weeks. A calling hour will be held Friday, February 8, from 12:00 to 1:00 P.M. with the funeral immediately following at 1:00 P.M. at Fiske-Murphy & Mack Funeral Home, 110 New Athol Road, Orange. Burial with Military Honors will follow in Silver Lake Cemetery where Helen will be laid to rest next to her beloved husband. In lieu of flowers, memorial contributions may be made in Helen's memory to your local hospice or to the Alzheimer's Association, 225 N. Michigan Ave., Floor 17, Chicago, IL 60601.

ATHOL- Helen Marie Chiasson, 96, passed away peacefully on January 30, 2019 at her daughter's home in Ballston Spa, NY, with her family at her side. She is the widow of retired Police Chief Ernest Chiasson of Athol. She was born in Philadelphia,... View Obituary & Service Information

The family of Helen Marie Chiasson created this Life Tributes page to make it easy to share your memories.