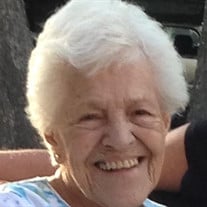 GARDNER - Grace Emma (Gauvin) Gaulzetti, of Gardner, formerly of East Templeton, peacefully passed on Friday, April 5, 2019 at the age of 93, in the care of her family. Grace was born the daughter of Henry and Petronella (Davis) Guevin on August 27, 1925. She married Richard “Dick” Gaulzetti on January 29, 1944, and they lived in Gardner then East Templeton for their life together. Grace attended Gardner schools. She worked at JC Penney in Gardner for many years and later worked at the former Landry’s Cleaners as a presser. Grace enjoyed traveling with Dick, particularly their many winters in Melbourne Beach, Florida. She was an excellent card player and especially enjoyed playing cribbage with friends at the Binnall House as well as at the Gardner Senior Center. Grace is predeceased by her parents, her husband, her sister, Doris Gensler, and her son-in-law Jack H. Bazydlo. She is survived by her two daughters: Patricia A. Bazydlo of Gardner, Barbara A. Lesperance and her husband Alan of Jefferson, GA; three granddaughters: Dawn M. Comptois and her husband Paul of Spofford, NH, Julie L. Morris and her husband Mark of Gardner, Renee A. Terranova and her husband William of California; one grandson: Todd H. Bazydlo and his wife Lynne of Millbury; three great-grandsons: Jack C. Bazydlo, Samuel H. Bazydlo and Michael Terranova; two sisters-in-law: Leonette Gaulzetti, Anita Wheeler: two brothers-in-law: Albert Gaulzetti, Sr., Earl Gaulzetti; several nieces and nephews along with countless friends, both lifelong and recent. In 1983, Grace elected to donate her body to the UMass Medical School Anatomical Gift Program. At Grace’s request, services will be private and at the convenience of the family. In lieu of flowers, Grace’s family asks that you consider making a donation to the Gardner Visiting Nurses Association Hospice Program, c/o Marketing and Business Development, 34 Pearly Lane, Gardner, MA 01440 in Grace’s memory, in recognition of and with extreme gratitude for the kind, gentle care provided to her in her final months. www.gvnahealthcare.org To leave an online condolence, please visit www.mackfamilyfh.com

GARDNER - Grace Emma (Gauvin) Gaulzetti, of Gardner, formerly of East Templeton, peacefully passed on Friday, April 5, 2019 at the age of 93, in the care of her family. Grace was born the daughter of Henry and Petronella (Davis) Guevin on August... View Obituary & Service Information

The family of Grace Emma (Gauvin) Gaulzetti created this Life Tributes page to make it easy to share your memories.