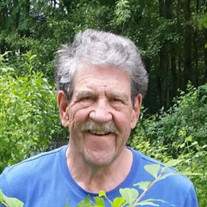 Fred Chmura fell asleep in death on January 1st at home with family after a long battle with Lewy Body dementia. He was raised in Easthampton, MA along with his older brother Ted and sister Frances. Fred (Fredzio) was raised by parents of Polish descent, John & Stella Chmura. He graduated from Easthampton High School and participated in several sporting events. His hometown of Easthampton always held a special place in his heart and he treasured working with children with disabilities for three years at Whitebrook Middle School. While living in Easthampton, he wed Laura, his "peachy pie" who became his wife of 45 years. Afterwards, Fred and Laura moved to Athol, MA where Fred spent 25 years employed in Dept 30 at Starrett Tool Company. Fred enjoyed raising a family of his own including his "boy" Zephyr, his "Polish Princess" Sarah and Stefania (B.J.) Later on in life, he welcomed a daughter in law, Renee and a son in law, Deterio along with several nieces and a nephew. He was especially happy to welcome his granddaughter, Carolina. Fred was a spiritual man who found real meaning and purpose in life when he accepted a Bible study from Jehovah's Witnesses in the 1970's. He was baptized in 1974. His faith helped him to endure many adversities in life. He found joy in Jehovah God's creation from the "small creatures to the great ones" from the honey bees to the wild turkeys to the famous sycamore tree in Sunderland. He was a real outdoorsman who spent countless hours gardening, planting fruit trees, landscaping, picking fruit and berries, bird watching and fishing at Quabbin Gate 31. He also loved golfing and liked to challenge his son to a game of golf. In the winter, he liked to go ice skating and taught his children how to skate. Fred enjoyed the simple things in life such as supporting local farmers like King's Farm and buying local honey and maple syrup. He also appreciated local artisans like the ones at Petersham Craft Center. He supported local music and became a "music man" who enjoyed all types of music including Polka and BlueGrass. He was always on the lookout for the next musical performance. If he came across a jukebox at a restaurant he would always insert a few quarters and play some Oldies. Fred also enjoyed dancing with his wife and daughters. One of Fred's nicknames was "Friendly Fred" because of the sincere personal interest that he took in people of all ages and because of his large heart and his continuous display of generosity towards others. His nickname for himself was the "Polish Peasant" who enjoyed his share of pierogies and galumpkis. He liked to go on "adventures" with his family and friends. One of his recurring adventures with his daughter Sarah was Richardson's Candy Kitchen for their dark chocolate coconut squares. His favorite place to visit was the National Seashore of Orleans, MA for annual family vacations. He enjoyed beachcombing on the shore, fishing, going to Crowe Farm and putting in an order at the A&W restaurant for a scallop roll and a large root beer. His family treasures the memories that they have of Fred living his "best life" on his Cape Cod vacations. A special thank you to all the small businesses who displayed an extraordinary amount of compassion in their dealings with Fred: Tilly @ Macmannis Florist, Red Apple Farm, Hamshaw Lumber, Staff at Quabbin Gate 31, Bruce's Watch & Jewelry in Gardner, Richardson's Candy Kitchen in Deerfield, Andy's Oak Shoppe in Greenfield, Golonka Farms in Whately, Apex Orchards in Shelburne Falls, Goose Hummock Shop & Bird Watcher's General Store in Orleans. His family would like to thank his medical team including his palliative care nurse, Kim and his loyal friends, Rick & Anita & Ernie along with his sister in law, Beth and her husband, Felipe AND all his friends in the local congregations of Jehovah's Witnesses. "Happy trails to you....until we meet again." A Memorial service will be held virtually on a later date on Zoom. For information on how to connect, please call or text 845-800-9028. The information on how to connect will also be in a future newspaper notice. To leave an online condolence please visit www.mackfamilyfh.com Fiske-Murphy & Mack Funeral Home, 110 New Athol Road, Orange, is assisting with arrangements. Kevin J. Mack and Walter C. Taylor, funeral directors.

Fred Chmura fell asleep in death on January 1st at home with family after a long battle with Lewy Body dementia. He was raised in Easthampton, MA along with his older brother Ted and sister Frances. Fred (Fredzio) was raised by parents of Polish... View Obituary & Service Information

The family of Frederick W Chmura created this Life Tributes page to make it easy to share your memories.

Fred Chmura fell asleep in death on January 1st at home with...