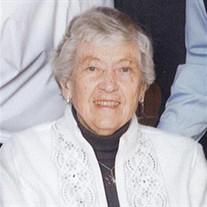 While surrounded by family, Elizabeth Jane Hillis (94) peacefully joined her loving husband of 57 years, Frederic W. Hillis in Heaven, on December 17, 2019. She was predeceased by her parents, Archie and Hazel (VanAkin) Faulkner and her sisters, Shirley Clark and Yective Neale and one brother Jacob Hilton Faulkner. She is survived by two sons, David and his wife Patrice, and James and his wife Raquel; two daughters, Kathy Dennis and husband Steven, and Nancy Hillis; six beloved grandsons, David Hillis Jr. and his wife Susan, Jeffrey Hillis and his wife Carolanne, Ryan Hillis, Matthew Hillis, Nicholas Dennis and his wife Christy, and Michael Dennis and his wife Kaitlyn; seven great-grandchildren, Grace, Lily, Olivia, Benjamin, Jack, Jacqueline and Abigail-Jane; and two dogs whom she adored, Trigger and Anna. Jane was born on March 3, 1925, in Hale Eddy, NY. She graduated from Deposit High School with the class of 1944 and became a Registered Nurse in 1947 from the United States Cadet Nurse Corps at Charles S. Wilson Memorial Hospital School of Nursing, Johnson City, NY. Jane began her nursing career at the University of Michigan Hospital in Ann Arbor, MI and then returned to her home state to work at the Walton Community Hospital in Walton, NY. It is there that she met her husband, Fred. Jane and family moved to Athol, MA in 1959 where in addition to raising her family, she became involved in many community organizations. She was Chairperson of the Athol Council on Aging; worked as an RN on the Health Clinics and Blood Mobile drives; and she was a Member of the Athol Memorial Hospital Auxiliary and founded their biggest fund raiser, the River Rat Pancake breakfast. Jane was instrumental in bringing senior transportation to the Athol area working with the Franklin County Transit Authority. She was a Member of the Starrett Memorial United Methodist Church servicing on several committees and excelled at the sport of curling as a Member of the Petersham Curling Club. In addition to serving the elderly, Jane also enjoyed her involvement with the youth through her leadership roles in the Campfire Girls as well as the Tully Mountain 4-H Horse Club. To those that knew her, Jane was an independent lady, with a great sense of humor and many quirky sayings. She was a woman ahead of her time. She was adventurous, be it a “Joy Girls” cross-country trip with her nursing companions in the latter 1940s or driving cross country with her husband, Fred, in the 1990s. Jane could be seen driving tractors; building fences; hunting; or riding horses. Jane enjoyed everything outdoors. She spent countless hours tending to her gardens and never found a plant that she could not bring back to life. She just loved to get her hands dirty even at the age of 94. Jane enjoyed boating (especially sailing); camping; bicycling; bird watching; her many animals; but most of all, Jane loved spending time with her family! Jane had a very strong work ethic which she gladly shared with her children and she possessed many hidden talents such as creating home movies, upholstering, designing stained glass keepsakes and playing the harmonica. She could truly make something out of nothing with very little effort. Jane was a great cook and baker, and will always be known for her fantastic grape pies! The family will receive friends at the Higgins-O’Connor Funeral Home; 146 Main Street, Athol, MA on Friday, December 20, from 4 to 7:00 p.m. A memorial service will be held on Saturday, December 21, at 10:00 a.m., at the Starrett Memorial United Methodist Church, 40 Island Street, Athol, MA with the Rev. Mary Owen, officiating. Graveside services will follow at Silver Lake Cemetery, Athol. In lieu of flowers, in Jane’s memory, please love your family, make it a priority to spend time with them, and treat others the way you want to be treated! To leave an online condolence please visit www.mackfamilyfh.com. Higgin's-O'Connor Funeral Home 146 Main St., Athol is directing arrangements.

While surrounded by family, Elizabeth Jane Hillis (94) peacefully joined her loving husband of 57 years, Frederic W. Hillis in Heaven, on December 17, 2019. She was predeceased by her parents, Archie and Hazel (VanAkin) Faulkner and her sisters,... View Obituary & Service Information

The family of Elizabeth Jane Hillis created this Life Tributes page to make it easy to share your memories.