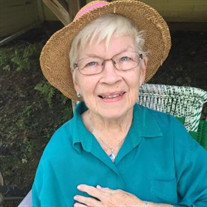 Colleen E. MacManus Collen E. (Smith) MacManus, born on August 20, 1935, died at home after a long sickness on January 1, 2021 at the age of 85. She was a 58 year resident of Royalston, MA. She was predeceased by her husband, Leslie G. MacManus, to whom she was married for 31 years. She is survived by her daughter, Wanda (MacManus) Young and husband Sam of Rutland, VT; son Kevin MacManus of Fitchburg, MA; son Jeffrey MacManus and wife Mary Fadel of S. Deerfield, MA, and son Keith MacManus and wife Valerie of Columbiana, OH; as well as her own siblings, Sandra (Smith) Bush of Orange, MA and David Smith of Gardner, MA. She is also survived by numerous grandchildren and great-grandchildren. Fiercely independent, she strived to live independently even with the coming of advanced age and failing health. She loved her home, full with a lifetime of memories and family photos, and remained living there to the end. Colleen was the daughter of Stanley A. and Jeanette C. (Cloutier) Smith and spent her youth living in North Orange, graduating from Orange High School in 1953. Her early adult years began with nursing school in Gardner, MA, followed by marriage and moving to Bremerhaven, Germany where she started her family with her new husband who was assigned there as an MP (Military Police) with the U.S. Army. Returning stateside with her husband and 2 children, she lived in Newport News, VA and in Florida, ultimately returning with her growing family (by now, 3 children) to Massachusetts, settling in Royalston in 1963, where she had her 4th, and final child (Keith). Colleen worked much of her life caring for others in health care: working in the 1960s and early 1970’s at the Eastern Star Home in Orange, MA and later providing in-home health care to home-bound people in the Athol/Royalston area. Colleen loved vegetable gardening; canning and preserving her successes for many years. She was recognized for years by many as an expert at making jams, jellies, fudge, and a host of other delights; and gifted, as well as sold those wares at flea markets, tag sales, and local fairs. Colleen was extremely proud of her children and grandchildren, always eager to share tales of their successes and accomplishments with anyone she met. Never one whom achieved great wealth herself, she shared what she had and freely offered what she could…a few dollars here and there, birthday and Christmas gifts, jam, jelly, fudge, zucchini bread and always… love. There are no current plans for calling hours or a funeral. Her family will conduct a Life Celebration later in the summer…allowing people the opportunity to receive COVID-19 vaccine.

Colleen E. MacManus Collen E. (Smith) MacManus, born on August 20, 1935, died at home after a long sickness on January 1, 2021 at the age of 85. She was a 58 year resident of Royalston, MA. She was predeceased by her husband, Leslie G. MacManus,... View Obituary & Service Information

The family of Colleen E. MacManus created this Life Tributes page to make it easy to share your memories.