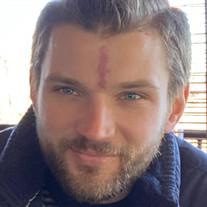 HARDWICK - Clayton Joseph Lohr passed away on November 3, 2021 in Brattleboro, VT after a courageous battle with addiction. Clayton had just completed his first rehabilitation treatment program. He was looking forward to reconnecting with family and friends, and sounded excited about his future in his last calls made to family. His life was tragically cut short less than one day after his release from rehab. He was 27 years old. Clayton was born on November 30, 1993 in Greenville, South Carolina. Shortly after, his family relocated to Hardwick, Massachusetts, where Clayton spent most of his childhood and adult years. Clayton attended Quabbin Regional High School and graduated in the Class of 2012. While at Quabbin, he was a star football player and basketball player. Clayton was a member of the winning team in the 2012 Clark Basketball Tournament. Clayton was also a very talented pool player, and could hang with the best of them. Since his childhood, he was a huge Boston sports and Iowa Hawkeyes fan. He especially idolized Boston Celtics player Paul Pierce. Clayton loved dogs, and was adored by his family’s dogs, Chloe and Benny. Clayton was known for his generosity and free-flowing kindness, and unwavering loyalty to family and friends. He will be so missed by those who knew him. Clayton is survived by his siblings, Carly and Chase Lohr; dad, Jim Lohr; mom, Darcy Lohr, and her partner, Chris Flynn. He also leaves behind his loving “Nana”, Sandra Bolger; aunts and uncles: Brent and Paula Bolger; Heidi and Bob Johnson; and beloved aunt, Tracey McDonald; his cousins: Jack Yost; Rachel, Garrett, and Lauren McDonald; and Curtis and Sydney Bolger. He is predeceased by his grandfather, Joe Bolger; and uncle, Jimmy McDonald. In lieu of flowers, please send donations to Camp No Limits in memory of Clayton Lohr.

HARDWICK - Clayton Joseph Lohr passed away on November 3, 2021 in Brattleboro, VT after a courageous battle with addiction. Clayton had just completed his first rehabilitation treatment program. He was looking forward to reconnecting with family... View Obituary & Service Information

The family of Clayton Joseph Lohr created this Life Tributes page to make it easy to share your memories.