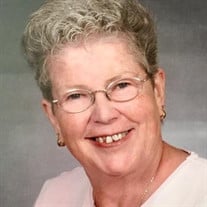 ORANGE -- Carol A. Wetherby, 76, of 123 Winter Street, died Friday, October 18, 2019 at her home surrounded by her family after her courageous fight against colon cancer. Carol was born in Gardner, Massachusetts, April 18, 1943, the daughter of the late George S. and Emeline A. (James) Rowe. She had lived in Orange most of her life, graduating from Mahar Regional High School in 1961. Carol worked for the family business, Wetherby Gas Company for 37 years. Carol also worked at L.S. Starrett Company prior to starting her family and she also had many years working for Christmas Around the World which gave her and her husband many years of traveling the world together. Carol was a Girl Scout Leader for many years, a member of the Orange Fire Department Women's Auxiliary, a Lifetime Member of the Orange Gun Club, serving several years as the Club's Treasurer, a Member of the Athol-Orange Lodge of Elks #1837, spearheaded the Mass. Junior Conservation Camp, a member of Greater Gardner Relay for Life Luminary Committee, was a Relay Coordinator for Operations Christmas Child and a Member of the Athol-Orange Baptist Church. Carol and her husband, Jerry, had organized the Orange Santa Fund for five years. Carol also enjoyed her activity with the Silver Sneakers and being part of the Livestrong Group at the Athol YMCA. Carol also enjoyed spending time with her cat, Tig, paddle boarding with her grandchildren, vacationing with her family and watching her grandchildren at their various sporting events. She also enjoyed bowling with her friends at French King Bowling Center and crocheting and making hanging towels for family and friends. She is survived by a son, Gerald E. Wetherby, Jr. and his wife, Melissa of Orange; a daughter, Cheryl Bosse' and her husband, Guy of Gardner; six grandchildren, Kayla (Wetherby) Thorp and her husband, Chris, Kullen Wetherby, Caitlin and Catherine Bosse', and Gage and Oliver Blackbird; a sister, Joanne Elie and her husband, Paul of Charlestown NH; a brother-in-law, Dennis Wetherby and his companion, Tammy; a sister-in-law, Marilyn Spofford and her husband, Robert; and a sister-in-law, Sharon Wetherby; and several nieces and nephews. Carol was predeceased by her husband, Gerald E. Wetherby, Sr. in 2008 following 43 wonderful years of marriage. Funeral services will be held Thursday, October 24, 2019 at 11:00 a.m. at Fiske-Murphy & Mack Funeral Home, 110 New Athol Rd., Orange, with Pastor Don Theriault, of the Athol-Orange Baptist Church officiating. Burial will follow at South Cemetery in Orange. Calling hours will be held Wednesday, October 23, 2019 from 5:30 - 7:30 p.m. at the funeral home. In lieu of flowers the family suggests donations to: the Athol-Orange Baptist Church, 260 Walnut Street, Athol, MA 01331 or a charity of the donor’s choice.

ORANGE -- Carol A. Wetherby, 76, of 123 Winter Street, died Friday, October 18, 2019 at her home surrounded by her family after her courageous fight against colon cancer. Carol was born in Gardner, Massachusetts, April 18, 1943, the daughter... View Obituary & Service Information

The family of Carol A. Wetherby created this Life Tributes page to make it easy to share your memories.