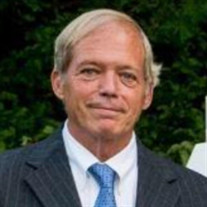 PETERSHAM, MA -Bruce C. Fiske of Petersham, MA died peacefully on 12/1/2020 after a brief battle with cancer. He was fortunate to have no pain, surrounded by his family at home. He is survived by his girlfriend Karen Roche, his sons Cameron and Trevor, their wives Nikki and Melissa, and his brother Brad. He embarks now to join his parents Robert and Barbara Fiske of Lexington, MA, as well as his brother Robert. More than anything, Bruce loved his family and friends wholeheartedly. He was always quick with a joke and a smile, was often seen with a cold Budweiser in his hand and always treated people according to the golden rule. Before retiring in 2018, Bruce was the owner of Fiske Automotive in Lancaster MA for 25 years. He was famous in the Volvo automotive realm, having won three Volvo International Service Technicians Awards (VISTA). In the early 1990s he was widely regarded as the best Volvo mechanic in North America. Bruce enjoyed skiing, camping, hiking, boating, working on his home and general outdoor activities. He also spent countless hours continuing his father’s work tracing the Fiske genealogy, happily discovering a direct lineage to the Mayflower. He was a former ski instructor, held his private and commercial pilots’ licenses, and was the Harvard, MA Scout Master for many years. A resolute moral compass, Bruce positively influenced the lives of thousands and will be missed dearly by anyone who was fortunate enough to have known him. Once COVID-19 has been eradicated, there will be a celebration of his life at his home in Petersham, MA. In lieu of flowers or donations, the Fiske family requests simple acts of charity and kindness to friends and strangers alike. We believe that is the best way to honor the life of someone so devoted to treating people the way he wanted to be treated. Tell them it’s for Bruce. To send an online condolence please visit www.mackfamilyfh.com. Fiske-Murphy & Mack Funeral Home 110 New Athol Road, Orange is assisting with arrangements.

PETERSHAM, MA -Bruce C. Fiske of Petersham, MA died peacefully on 12/1/2020 after a brief battle with cancer. He was fortunate to have no pain, surrounded by his family at home. He is survived by his girlfriend Karen Roche, his sons Cameron... View Obituary & Service Information

The family of Bruce C. Fiske created this Life Tributes page to make it easy to share your memories.