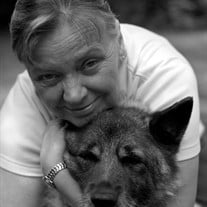 ATHOL - Brenda Gearl was born in Caldwell, New Jersey on 6 October 1946. The youngest of three children, Brenda was raised in Caldwell, New Jersey by her parents, Dorothea and Arthur Jonassen. Brenda's grandmother, Mary, cared for her and passed down a tradition of storytelling and an appreciation of spooky tales. Although raised in a prosperous town outside of New York City, Brenda inherited a love of nature from her father. When she came of age and married her first husband, John, she insisted on raising her children in the country. Brenda loved her children unconditionally, encouraged them to be whomever they wished to be and urged them to find their true place in the world. Brenda spent 20 years in Blairstown, New Jersey with her family and an ever-growing array of animals - horses, dogs, cats, a duck and goose and many others. When she wasn't being a marvellous mother and caring for her family, Brenda painted scenes of rural life in oils, rode her horses and explored the outdoors. Brenda married her second husband, Michael Gearl, in 2002 and embarked on a series of adventures. The couple first lived in Florida and South Carolina before settling in Athol, Massachusetts in 2010. In retirement, Brenda and Michael ran a garden art business from their home on Lake Street - painting and detailing cast stone. Alongside her love of the outdoors and nature, Brenda also cherished her quiet time lost in a book or old movie. Brenda read a wide variety of classic and popular fiction, including mystery novels by Agatha Christie and Conan Doyle, Charles Dickens, Daphne du Maurier and Stephen King. Amongst her favorite films were The Thin Man, The Wizard of Oz, The Portrait of Jennie, The Ghost and Mrs Muir, National Velvet, My Fair Lady and the works of Alfred Hitchcock. Brenda was also very much a child of the 1950's and had a fondness for Buddy Holly, the Beatles, Simon and Garfunkel and also could be found listening to Burt Bacharach tunes and songs by Neil Diamond. Lately, Brenda thoroughly enjoyed being an extraordinary grandmother to Jaden and, bridging the distance all the way to London and Paris with love, to Arthur. To the last, Brenda never stopped supporting her children through all of life’s trials. She often joked that she preferred animals to people, but Brenda's lifetime of modesty, quiet service and kindness to all reveals that, perhaps, she adored everyone equally. After several years struggling with cancer, Brenda died at home in Athol with her husband and daughter by her side on 24 April 2020. Brenda is survived by her sister Arlene, husband Michael, daughter Holly and granddaughter Jaden, son John and grandson Arthur. Funeral services are private. To leave an online condolence, please visit www.mackfmailyfh.com Mack Family Funeral Homes – Fiske-Murphy & Mack Chapel, 110 New Athol Rd., Orange is assisting with arrangements

The family of Brenda Helga Jonassen-Gearl created this Life Tributes page to make it easy to share your memories.