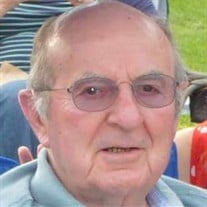 GARDNER - Bernard R. LaFortune, 88, of Gardner, Massachusetts, passed away peacefully December 19th in the hospital after complications from congestive heart failure and pneumonia. His wife Dorothy was by his side. Born March 7th, 1931 He served in the Airforce during Korean War as a radio mechanicstationed in Japan. While in the service he played baseball for the Military Base Baseball Team throughout Japan. He also became a member of International Association of Approved Basketball Officials (IAABO) while overseas, which became his “avocation and joy”and a lifelong association with basketball officiating including serving on the Massachusetts Interscholastic Athletics Association (MIAA) basketball officials committee, serving as Secretary/Treasurer of the International Association of Approved Basketball Officials (IAABO) Board #44 for 19 years, a member for over 60 years. He was awarded lifetime member status, and in 2006, he was named secretary Emeritus of the IAABO Board #44. He was past-president of IAABO Board #44 and of the Massachusetts State Board of Basketball Officials. In his day he was an avid golfer and was a longtime member of the Gardner Golf Commission. He was inducted into the Gardner High School Hall of Fame in 2005 as a “Four-Letter Man. Bernie worked at Raytheon Corporation 8 years before opening his own business, Bernie’s Linoleum Shop in Gardner which he ran for 20years. When he retired from his business, he worked at Mount Wachusett Community College. Bernie was a devoted husband and father and the very proud grandfather of tripletgranddaughters which were the joy of his life and always said “they were the reason he lived a long happy life”. He was a great story and joke teller, loved doing his daily crossword puzzle and spending time with his family and friends.Everyone that met Bernie was touched by his lightness of spirit. Bernie is survived by his wife, Dorothy of 62 years, his daughter Deb and her husband, Kevin Morse of Marstons Mills, MA, his granddaughters, Sarah Walker and her husband Alex of Nahua, NH, Jessica Ohanian and her husband Eric of Canton, MA and Kaitlyn Morse of Portland Oregon. A Funeral Mass will be held at Our Lady of the Holy Rosary Church 135 Nichols Street Gardner, Mass at 12:30 PM Friday December 27th followed by burial with military honors at the Massachusetts Veterans’ Cemetery in Winchendon. Calling hours will be held at Mack Family Funeral Home 105 Central Street Gardner, MA, Thursday December 26th from 5 -8 PM. The family invites you to a luncheon to follow at the Ale House in Gardner. In lieu of flowers, a donation in his name can be sent to IAABO Board 44 P.O. Box 1109 Gardner, MA 01440 please indicate on memo line Bernard R. LaFortune Scholarship Fund. To send an online condolence please visit www.mackfamilyfh.com Mack Family Funeral Home 105 Central St., Gardner is directing arrangements.

GARDNER - Bernard R. LaFortune, 88, of Gardner, Massachusetts, passed away peacefully December 19th in the hospital after complications from congestive heart failure and pneumonia. His wife Dorothy was by his side. Born March 7th, 1931 He... View Obituary & Service Information

The family of Bernard R. LaFortune created this Life Tributes page to make it easy to share your memories.