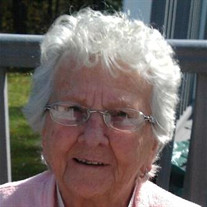 Bernadette M. (Labrie) Chaisson, 92 of Belchertown, MA and formerly of Athol, MA went home to be with her Lord and Savior on May 20, 2019. She was born in Athol, MA on October 9, 1926 the daughter of the late Alex Labrie and the late Rosina (Arsenault) Labrie. She was employed for many years at the former Fox Run Restaurant in Phillipston, MA and retired from the L. S. Starrett Company. She was an active member of the North Quabbin Bible Church. Known to some as Ben and others as Bernie, she gave generously and loved unconditionally. Dementia took over her mind and body during the last several years of her life, but she never completely lost that spark. She was lovingly cared for by her three daughters, Barbara, Charlene and Dianne until she was escorted into glory with the words “well done, thy good and faithful servant.” She leaves her five children: Barbara Clyatt and her husband Shannon of Athol, MA. Charlene Allen and her husband Mike of Belchertown, MA, with whom she lived, Dianne Piermattei and her husband Mike of Fitzwilliam, NH; Steven Chaisson and his wife Debbie of Athol, Andy Chaisson of Jaffrey, NH. She also leaves her grandchildren: Michael Morandi and his wife Paige; Cody, Nick, Ashley, Cassie and Chris Bridgwood; Andrew, Aidan, Avery and Austin Clyatt; Ryan Rathburn, Christopher and Kyle Allen, Natasha Smith, Kendra Cullen, Katie and Makayla Chaisson, Andrew Chaisson, Zachary Chaisson and his wife Emily; great grandchildren: Peyton and Quinn Rathburn, Jayden Savage, Malie and Brantley Prue, Millie Chaisson; her sister: Yvonne Bryant of Wayland, NY and her brother: Joseph Labrie and his wife Ruth of Athol. She was predeceased by her beloved grandson Jason Trombley, her son-in-law Mike Bridgwood, her brothers: Edgar Labrie, Paul Labrie, Zenna Labrie, Romeo Labrie and her sister Emelda Luippold. A memorial service will be held on June 1, 2019 at 11:00 a.m. at the North Quabbin Bible Church, 1314 West Royalston Rd., Athol. There are no calling hours. In lieu of flowers, memorial donations may be made to the Jason Trombley and Mike Bridgwood Scholarship Fund, c/o Athol Credit Union, 513 Main St., Athol, MA 01331. To leave an online condolence, please visit www.mackfamilyfh.com. Fiske-Murphy & Mack Funeral Home, 110 New Athol Rd., Orange is assisting with arrangements.

Bernadette M. (Labrie) Chaisson, 92 of Belchertown, MA and formerly of Athol, MA went home to be with her Lord and Savior on May 20, 2019. She was born in Athol, MA on October 9, 1926 the daughter of the late Alex Labrie and the late Rosina... View Obituary & Service Information

The family of Bernadette M. (Labrie) Chaisson created this Life Tributes page to make it easy to share your memories.