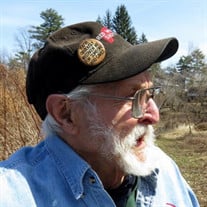 ATHOL - Allie “Pete” Strong, 91, passed away at his home on July 18, 2019, after an illness. He was the son of the late Allie and Exina Strong, and proudly lived in Athol all his life. Often described as a “unique character,” Pete lived life on his terms. He felt no need to follow fashion trends and favored old “comfortable” favorites. Gifts of new clothing often went straight to the drawer to be worn “if I need them.” The drawer is where they stayed. Pete was not likely to get any speeding tickets, and anyone who has been caught in the “Pete parade” will know all about that. Known by many as the guy who brought his cannon every year to start the River Rat race, Pete enjoyed socializing and talking, talking, talking. His home was a gathering place for family, friends, and strays. While operating a shoe business out of his home, many came for the shoes, but it was often about more than the shoes. It was a place people came to sit by the woodstove, have a beer or two, and shoot the breeze. A collector of antiques and just about everything else, Pete enjoyed his stuff. He also enjoyed hunting, fishing, hanging out at his camp, blueberry picking, metal detecting and watching old westerns over and over again. (We won’t mention chewing tobacco.) He was a World War II veteran, having served in the Navy. Pete will be sadly missed by many, especially his family. They are his son, Kent Strong, of Athol and his daughter, Kathy Colmenares, of Royalston. His other son, Kris Strong, passed away in 2016. Their mother and Pete’s “bride” for more than 60 years, Gerry (Pratt) Strong, passed away in 2008. His daughter-in-law, Suzanne Strong, and son-out-of-law, Robert Cromwell, shared many happy years with Pete as members of the Strong family. He leaves four living and loving grandchildren. They are Michael Strong and wife Maggie of Charlottesville, VA, Melissa Graham and husband Joe of Maynard, Andre Colmenares of Bishop, CA, and Jason Strong and his partner Amanda of Gardner. Another grandson, Andrew Strong, passed away in 1995. Great grandchildren, a source of immense joy for Pete in his later years, are Caroline, Laurel, Emery, Beau, Allie, and Jack. Pete leaves one sister, Judie Oleson and husband Bob, of Connecticut and a sister-in-law, Shirley Recos, of Phillipston, as well as many nieces and nephews. He was predeceased by a brother, Donald Strong, and two other sisters, Lillian Begor and Muriel (Mikey) Watkevich. The family extends deep gratitude to Pete’s many friends for enriching his life. You know who you are. Funeral services will be held on Friday, August 2, 2019 at 11 am in the Fiske-Murphy & Mack Funeral Home 110 New Athol Road, Orange. Burial will be private. A calling hour will be held on Friday, August 2, 2019 from 10-11 am in the funeral home. In lieu of flowers the family suggests memorial donations be made in his memory to a charity of one’s choice. To send an online condolence please visit www.mackfamilyfh.com. Fiske-Murphy & Mack Funeral Home, 110 New Athol Road is directing arrangements.

The family of Allie "Pete" Strong created this Life Tributes page to make it easy to share your memories.