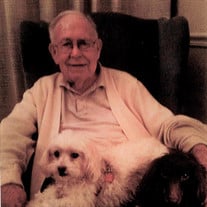 ATHOL- Alexander “Sandy” M. Robertson, Jr., 90, of Athol, passed on the evening of his 90th birthday on December 24th at the Quabbin Valley nursing home. Sandy was born December 24, 1930 in Athol, son of the late Alexander Robertson, Sr. and the late Jessie B. (Lyall) Robertson. He was a 1948 graduate of Athol High School. He served in the United States Air Force from March 5, 1952 until his honorable discharge on March 4, 1956. Sandy worked at Norton Air Force Base in San Bernardino in the flight records management branch of the Office of Computer Systems until his retirement in July 20, 1989. After many years of living in California in 2004 he made the decision to return to Athol to be closer to family. Sandy lived life to the fullest. He was a generous man who loved to have fun, sing, and host family parties. He enjoyed traveling, especially to Australia, Hawaii, and Las Vegas. He was also known to have a green thumb. You could always find him outside tending to his extensive rose gardens, and many flowers. As an avid animal lover his many dogs were an important part of his life, and most certainly greeted him at the rainbow bridge. He was predeceased by his brother Bruce Robertson of Athol. He leaves a brother, William Lyall Robertson and his wife Ann of CT; A sister, Margaret A. (Peg) Robinson of Athol; A sister in-law Joan Robertson Brighenti of Athol. He also leaves his great-nephew, Andrew Robinson of Athol, who was his main caregiver for many years, and several other nieces and nephews. In lieu of flowers, memorial contributions may be made in his memory to the Athol High School Scholarship Association, 2363 Main St., Athol, MA 01331 To send an online condolence, please visit www.mackfamilyfh.com. Funeral services will be private with the assistance of Fiske-Murphy and Mack Funeral Home, 110 new Athol Road, Orange.

The family of Alexander M Robertson Jr. created this Life Tributes page to make it easy to share your memories.